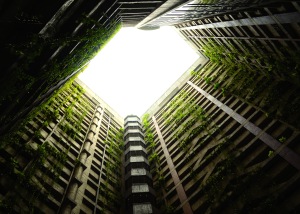 The ladies tea club was holding its fortnightly meeting today. The meeting was of course just a ruse for the ladies of the four blocks to meet and gossip in the community recreational hall. Every member was expected to volunteer at least once a year. The chosen member paid for all the refreshments and was expected to give a small token of appreciation.

Marla was not happy. This fortnight, her neighbour Sanchi had been chosen. Marla had never really liked Sanchi who had moved into the next apartment recently. She had observed some strange people entering but never leaving Sanchi’s house. Yes, she had kept a constant watch through her peephole-one can’t trust foreigners. Sanchi had Gypsy blood, she was sure. I mean who else had that olive skin, kohl lined eyes and long black hair!

But Marla simply could not afford to miss all the gossip. So off she went.

Sanchi stood at the door, thanking everyone and handing over a small plant .As she handed it, she whispered something to each member which made them smile. Marla did not like the looks of that plant but stood waiting. Maria, her friend was in front of her. Sanchi whispered something and handed over the plant to Maria and Marla was astonished to see Maria hugging Sanchi. Maria never hugged anyone and Marla had been her friend for the last 5 years!

Her turn came and Marla was sorely tempted to refuse it but good manners made her grin and bear it. Sanchi handed her the creepy looking plant and whispered, “Plant it in every window ledge and your happiness will multiply. The world will cease to matter and you will be reunited with Luke.”

Marla was shocked. No one knew about Luke-her husband, who had disappeared some 6 years back. How did this woman know about her secret? She was definitely not going to plant anything anywhere. She threw the plant in a dustbin in the hall.

A week later she was surprised to see greenery sprouting from every apartment and laughter and music emanating from all corners. But strangely she could see no one anywhere. So she decided to call on Maria who lived on the tenth floor.

As she reached the landing, a strange smell made her recoil. She was horrified to see green tendrils of some strange plant blocking Maria’s door. When she tried to go near, it hissed and snarled, Frightened she backed off.
Back home, she dialed every number in her phone book but was greeted with only silence. That night, she heard strange slithering noises in the corridor.

Morning saw her packing her bags-she had to leave! But when she came out of her apartment she was petrified to see thick green, bulbous curtains, blocking all exits.

Marla realized it was too late to escape! The world would definitely cease to matter now for she was going to die and be reunited with Luke, whom she had murdered 6 years ago.

The above story was written for Write on Edge,writing prompt:2014,Week 21.The challenge was to write a piece of fiction or poetry in 500 words or less(mine is 500 words,including the title)based on either the photo above (I decided to pick the photo)or use the quote ,Go oft to the house of thy friend, for weeds choke the unused path.” by Ralph Waldo Emerson,or use both.For more details or to participate please click  on this url http://writeonedge.com/2014/05/writing-prompt-2014-week-21/