Ben felt irritable. He rubbed the back of his neck but his rigid muscles dismissed the placatory move. His stomach rumbled and knotted in protest.

He had no idea what he should do. The blue file on the desk beckoned him but for once he had no wish to be enticed by its enchanting contents.

He started pacing, raking his fingers through his hair. He had to find a solution. After all he, Ben Bradshaw was the CEO of this company.

A soft knock on the door startled him and he barked a sharp, ”Come in!”

Naomi, his personal assistant came in carrying a cup of coffee and a plate of fruit salad.”Ben, time to stop starving yourself,” she said clearing the coffee table. She added,”Mindy had called. She told me to remind you that it’s your turn to pick Stacy up from school. I will be back in 20 minutes to clear the table.”

Ben smiled. Naomi had been a great find-reliable and trustworthy-her only weakness, a taste for handsome, high flying executives, like Ben. Not that Ben minded. Naomi was young, sexy and had no demands. She knew when to keep her mouth shut and was not clingy. And Mindy need never know.

“Naomi, you go have lunch and yes, I will have the papers ready for the Board meeting by 4-will brief you on that too.”

Naomi smiled, winked at him and left, swinging her hips,encased in a beautifully tailored, slim red skirt, knowing well the effect it had on Ben.

Ah, but no point in dwelling over those forbidden pleasures now, Ben told himself, that’s for this weekend when Mindy flies off for her annual fashion show at Milan. For now, he needed to eat first and then get back to work.

Wolfing down the fruit salad Ben realized that he had been ravenous. Good no one could see him eating like a pig, he chuckled. Satiated, he started sipping the coffee and mulled over the contents of the file. He had hired a special agency to look into embezzlement from company accounts and they had come up with shocking facts.

Ben had all the facts, figures, dates and the names behind the racket. He was shocked that it had been going on for over a year and no one had had any inkling. But, tomorrow morning, in the board meeting all the masks would be off and a lot of heads would roll. He was waiting for the last two names on his hit list.

The intercom on his desk buzzed.”There is a special delivery for you Sir.” It was Robin, the lobby manager. “Should I send the package in?”He asked.”Do that Robin and please see to it that I am not disturbed for the next ten minutes. Naomi is out for lunch.”

Where was Naomi? He needed to talk to her.

Ben stood up and the room swam. He clutched at the table, trying to steady himself. Queasiness clutched at his innards. His stomach heaved and he stumbled into the bathroom and threw up. Everything that he had eaten came up in stringy gobs. He lay there drained, seeing black spots, unable to move. He clutched at his heart, sweat soaking his shirt. He was being sucked into a black hole of excruciating pain.

The door opened. It was Naomi.

Mindy stood behind her.

Ben tried to speak but no sound came.

“Hush!”said Naomi,” I know you found out the last name was mine.”

“Why don’t we tell him all before he breathes his last, Naomi?”

“Poor dear! He has no idea that he has been had  by both of us working hand in glove,” clucked Naomi.

“I think the poison is working. Today’s dose has triggered the heart attack we were waiting for.”

“Yes, let us rehearse the last act once more, before the ambulance arrives.”

At school, six year old Stacy waited for her Dad to come pick her up. One by one all her friends left and the hall emptied. Stacy sat on the steps outside the school, forlorn, clutching the card she had made that day. Her small mouth quivered and a sob escaped her as she waited for someone to tell her what to do next.

The above story is my entry for the speakeasy at yeah write #150,this week.The challenge was to (a) write a work of fiction in 750 words or less (mine is 749,including the title) (b) use the following as the last sentence:  “She waited for someone to tell her what to do next.”  (c) make some sort of reference to the video short The Black Hole (click on the high-lighted title to watch).For more details click on this url http://www.yeahwrite.me/speakeasy/150-open/ 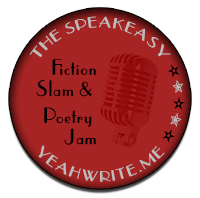